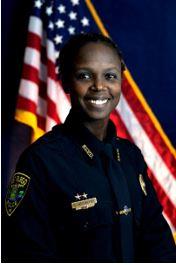 Officer Schweyen is from Haiti, however she grew up in North Fargo. She graduated from Fargo North High School 2004. After high school she attended and graduated from Minnesota State Community and Technical College with her Associates Degree in Criminal Justice. Officer Schweyen graduated from Alexandria Technical College’s 10-week Law Enforcement Skills program in the summer of 2007. She completed the Lake Region State College Police Academy in Fargo during the summer of 2016. Officer Schweyen was hired with West Fargo Police Department, as a Police Clerk in February 2010. She was sworn in as a Police Officer January 3, 2017.

As a Police Clerk, Schweyen was a Notary, Car Seat Technician, and in charge or Social Media. In May 2020, she was selected as the first SRO for the Horace Middle School and High School. In addition to her SRO duties she is on the Social Media Team, the CART Team, the PACT Team, Operation Life Saver, is a Mentor, and is in charge of Neighborhood Watch.

She was awarded the Commendable Service Award in 2016 and the Salute to Law Enforcement Award from Luther Family Ford and The Flag in 2018.

In her free time, Officer Schweyen enjoys spending time with her husband and three kids. Officer Schweyen is looking forward to working in the schools and building relationships with the staff and the children.