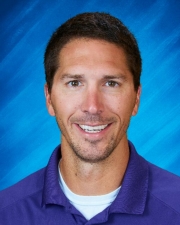 Tom Kirchoffner was named the Head Coach of the Sheyenne Boys’ Basketball program in 2013 but started building the program when he took over the first freshmen group in 2012. He helped transition the Sheyenne Mustangs into a varsity program, beginning with the 2014-2015 season. In their third year of varsity, Tom lead the Sheyenne Mustangs to their first ever state tournament appearance. In their 4th year, the team won the EDC Tournament and finished as State runner-up with a school record of 22-5. Coach Kirchoffner was named the ND Class A Boys Basketball Coach of the year in 2018.

Tom has a wide range of coaching experiences throughout his career. In addition to basketball, he has coached golf, football, and track & field.